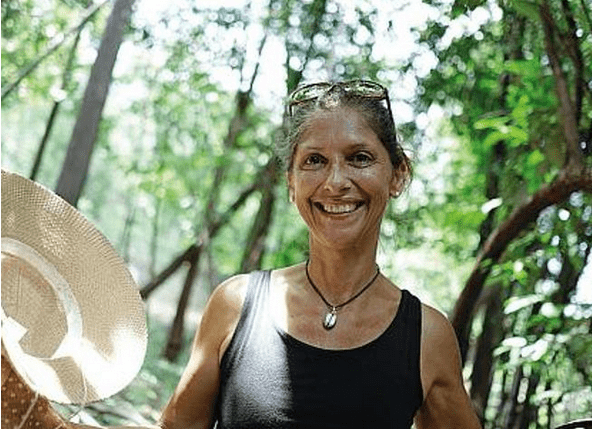 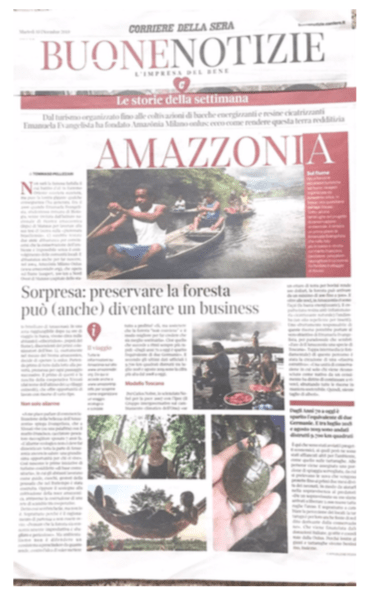 “I like to talk about marketing the beauty of the Amazon,” explains Evangelista, who lives in Xixuaú with her husband Francisco, a hunter-fisherman-gatherer married 7 years ago. “The ecological alarm should not make us forget all the healthy part of the Amazon: a great opportunity for those who live there”. Thus the first initiatives of so-called “community-based” tourism are born, in which the inhabitants work as guides, cooks, managers of the ecolodge that in the meantime has been built. Or the support for the cultivation of the Amazon nut, through the construction of an exchange network between cooperatives.

It wasn’t the famous butterfly whose flapping of wings in the Far East chenge the future and so on, but the giant otter that caused it. It was the year 2000 when Emanuela Evangelista, a Roman biology student, was invited by the National Amazon Research Institute (INPA) to go to Manaus to work on her degree thesis on «pteronura brasiliensis». She stayed for two years, enough to convince herself that environmental conservation is impossible without the involvement of local communities. And also enough to create, in 2004, Amazônia Milano Onlus (www.amazoniabr.org), which operates on the Jauaperi river, 500 km north-west of Manaus (capital of the Brazilian state of Amazonas). In an area reachable after 24 hours by boat, there are about a thousand inhabitants (the “ribeirinhos”, people of the river), descendants of the first colonizers of the 1800s. There, right in the middle of the Amazon biome, the non-profit organization started operating. First of all fighting against poverty, a premise for each subsequent step. The first of these is the birth of the Xixuaú cooperative (from the name of the last of the 14 villages involved), which offers job opportunities with various types of resources.

“I like to talk about marketing the beauty of the Amazon,” explains Evangelista, who lives in Xixuaú (in a stilt house) with her husband Francisco, a hunter-fisherman-collector with whom she has been married for 7 years. “The ecological alarm must not make us forget all the healthy part of the Amazon: a great opportunity for those who live there”. Thus, the first initiatives of the so-called “community-based” tourism are born, in which the inhabitants work as guides, cooks or managers of the inn that was built for this purpose (visit the ecotourism website). Or support for the collection of Brazil nuts, through the construction of an exchange network between cooperatives.

Sounds easy, but it is not. Above all because it is the starting reasoning that is not obvious: “To think that the forest is economically unproductive is wrong and dangerous”. But isn’t environmentalism defending an ecosystem regardless of how much it renders, against the idea of wanting to put everything to profit? “Yes, but arguing that the forest” is not profitable “is the best way to make people believe that it is better to replace it. From the 1970s to the present, the equivalent of two Germanys has disappeared”. And according to the latest official figures, the 9,700 square kilometers destroyed between July 2018 and August 2019 are the highest figure since 2008.

For Carlos Nobre, the 2007 Nobel peace scientist with the IPCC (the UN Intergovernmental Panel on Climate Change) “if a hectare of land for cattle yields 100 dollars, the forest can reach a minimum of 200 up to 500 ». And in addition to Brazi nuts, in the Amazon there are the açaí (the energizing berry), the copaiba (a natural anti-inflammatory resin) and the andiroba (an insect repellent oil). A responsible exploitation of these resources could lead to the real objective of Emanuela Evangelista, as paradoxical as it may seem: “Making Amazonia a kind of Tuscany”. The intermediate (and fundamental) stage of this journey was the creation of an “extractive reserve”: “A conservation unit in which only those recognized as natives by a census have the right to continue living there, exploiting all resources in a sustainable manner . So, no tree cutting “.

In this conservation area economic projects started, and others have been added such as the turtle one. People are assigned a portion of the supervised beach, from which the eggs are taken and protected until the first two months of life of the newborns, in order to help them survive the predators: “From one survived turtle out of 100 we now free 2,000 new turtles per year. And above all have managed to change the perception of the local inhabitants: the turtle is also a source of income for them, and it comes from conservation». Which is financed also by Italian donations, managed and coordinated by the non-profit organization. Because giant otters and turtles live very well together.