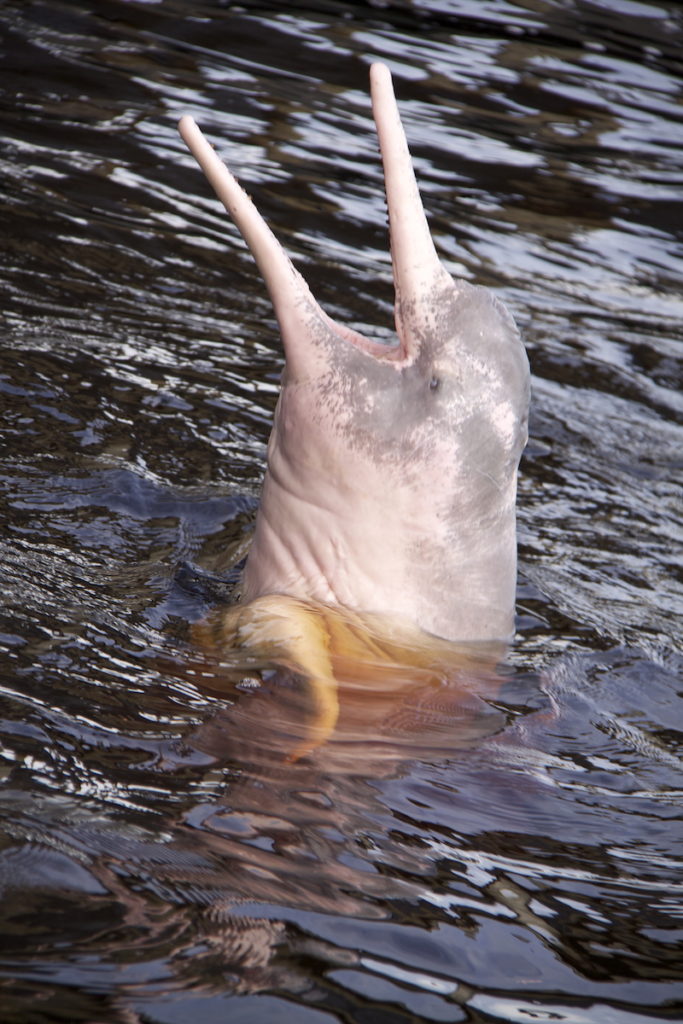 Like other toothed whales, they have a melon, an organ that is used for bio sonar. The dorsal fin, although short in height, is regarded as long, and the pectoral fins are also large.

The Amazon river dolphin are commonly seen singly or in twos, but may also occur in pods that rarely contain more than eight individuals. Pods as large as 37 individuals have been seen in the Amazon, but average is three. In the Orinoco, the largest observed groups number 30, but average is just above five. During prey time, as many as 35 pink dolphins work together to obtain their prey.

Typically, social bonds occur between mother and child, but may also been seen in heterogeneous groups or bachelor groups. The largest congregations are seen in areas with abundant food, and at the mouths of rivers. There is significant segregation during the rainy season, with males occupying the river channels, while females and their offspring are located in flooded areas. However, in the dry season, there is no such separation.

In 2008, this species was ranked by the International Union for Conservation of Nature (IUCN) as being data deficient, due to the uncertainty regarding its population trends and the impact of threats. While hunting is a major threat, in recent decades greater impacts on population have been due to the loss of habitat and inadvertent entanglement in fishing lines.

Increasing pollution and gradual destruction of the Amazon rainforest add to the vulnerability of the species. The biggest threats are deforestation and other human activities that contribute to disrupt and alter their environment.

Another source of concern is the difficulty in keeping these animals alive in captivity, due to intra-species aggression and low longevity. Captive breeding is not considered a conservation option for this species.

If you are lucky and the time of the year is appropriate, you will find some pink dolphins near our beaches on the banks of the rivers around Xixuau Amazon Ecolodge.