HomeNews A film crew at Xixuau

A film crew at Xixuau 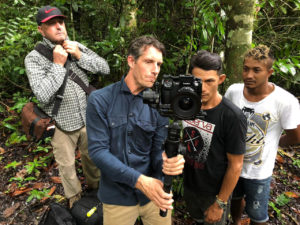 This month at Xixuaú we hosted a film production troupe from New Zealand.

The Mediawave Productions is working on a feature film about the devastation that is occurring in the Amazon and it features our projects and the inhabitants of Xixuaú as a living example that protecting the rainforest is possible.

We had a lot of fun and inspiring conversations with the troupe and the producer Larry Keating. Here is some more information about the film.

A Garden of Eden or Evil

This film endeavors to uncover the truths of the devastation that is occurring in the last of the world’s great rain forests. In May 2019 a record of over 700sq kms of Amazon rainforest was shown on the latest satellite technology to be cut down and torched.
Sir David Attenborough said recently: “If we don’t take action to stop the deforestation of the world’s great rainforests, the collapse of our civilizations and the extinction of much of the natural world is on the horizon.”
Now we are seeing, every day and every week, mounting evidence of unprecedented climate change all over the world, yet we stand by and watch the vital carbon sink that is the Amazon rainforest disappearing at a horrendous rate. Pete Bethune, an Eco-Warrior, and Sir Peter Blake are at the heart of the story. Both New Zealand conservationists were attacked during the course of their expeditions into the Amazon. Blake was killed in 2001 and Eco-Warrior Pete Bethune lived to tell his tale of a near death experience.

The film shows the brutal reality of criminal activities at all levels on the big screen. Blake, a world-renowned yachtsman turned conservationist, worried about what would happen if the rainforest continued to shrink, while Pete, our Eco-Warrior, in support of Blake’s concerns, explores visionary solutions to end the devastation.

A feature segment in the film is spending time with resident biologist Emanuela Evangelista and the river people of Xixuaú, who bring to the film a living example of the importance in protecting the rainforest and what the precious biosphere has to offer the world at large. The beauty of the reserve and the animal life within will be revealed in the film in spectacular 4K high definition.

The Producer Larry Keating wants to show the world in stark reality of what the expeditions of both Pete Bethune and Sir Peter Blake were trying to achieve. The film, Keating says, “will present the contrasts between the senseless exploitation of the Amazon and the poverty driven crime on the streets of the Amazon towns and cities, and what the special people of the Xixuau reserve can show the world by way of their respect for nature and the resulting benefits that conservation offers the planet”.